GridEd is a workforce development initiative that seeks to develop and train the next generation of power engineers and data scientists so that they can help shape the electric grid of the future by anticipating and fulfilling the needs of changing requirements. The GridEd collaborative consists of the Electric Power Research Institute (EPRI), four Partner universities (Stony Brook University, University of California – Riverside, Virginia Tech, and Washington State University), and utility and industry sponsors. EPRI is extending participation in GridEd to additional Affiliate universities who are nominated by utility and industry sponsors. GridEd leverages electric industry research to educate a future electric grid workforce by empowering new and continuing education students not only to become competent and well-informed engineers but also to participate and influence major technological, social, and policy decisions that address critical global challenges.

2013, the Department of Energy (DOE) awarded to EPRI and its team a project known as Grid Engineering for Accelerated Renewable Energy Deployment (GEARED) which consisted of four university partners in the eastern U.S. and Puerto Rico including Clarkson University, Georgia Institute of Technology, University of North Carolina – Charlotte, and University of Puerto Rico - Mayaguez. In 2016, the GridEd collaborative was awarded a second DOE project known as Solar Training and Education for Professionals (STEP). Through the STEP aware, GridEd expanded to the western U.S. three additional university partners were added including Arizona State University, Portland State University, and University of California - Riverside.

The electric power system is beginning to change fundamentally and profoundly—rapidly in some geographical areas, inevitable in all—with the rise of distributed energy resources (DER), such as small natural-gas-fueled generators, combined heat and power plants, electricity storage, and solar photovoltaics (PV) on rooftops and in larger arrays connected to the distribution system. GridEd's charge is to support and inform a growing knowledge base of these technologies.

Realizing the full value of DER investments requires a hub-and-spoke distribution grid that accommodates a two-way flow of electricity. Through a combination of technological improvements, policy incentives, and consumer choices in technology and service, the role of DER will become more important in the future.

DER and grid-provided power do not compete with each other; they are complementary sources of power when they are jointly planned. Today's grid, especially its distribution system, was not designed to accommodate a high penetration of DER while sustaining high levels of electric service quality and reliability. The technical characteristics of certain types of distributed generation, such as the variability and intermittency, affect the grid quite differently from traditional central power stations.

To fully realize the value of DER and to serve all consumers at standards of service quality and reliability they demand, the distribution grid needs to be designed to expand its capability to accommodate DER operation. DER offers benefits to the grid in the form of reduced capacity requirements, forming a symbiotic relationship.

The foundation for creating this symbiotic relationship is what EPRI is calling the Integrated Grid. Its realization requires utility technical staff that can plan and operate such a system. Engineers and planners that are tasked with developing and operating the future grid will require new and innovative knowledge. GridEd is dedicated to fulfilling this training role.

Expanding the GridEd Program - About the GREAT with Data Initiative 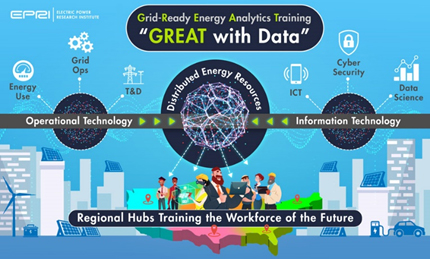 In 2018, the Electric Power Research Institute (EPRI) along with electric utility partners and four universities (Stony Brook University, University of California – Riverside, Virginia Tech, and Washington State University) were selected by U.S. Department of Energy Solar Energy Technologies Office (SETO) to receive a $6 million award to launch the Grid-Ready Energy Analytics Training (GREAT) with Data initiative. The project will design, develop and deliver professional training materials to train and recruit power systems workers and university curricula for new engineers and computer scientists. It will also develop credentials for the training and education needed in the electric utility industry workplace to transform the grid.